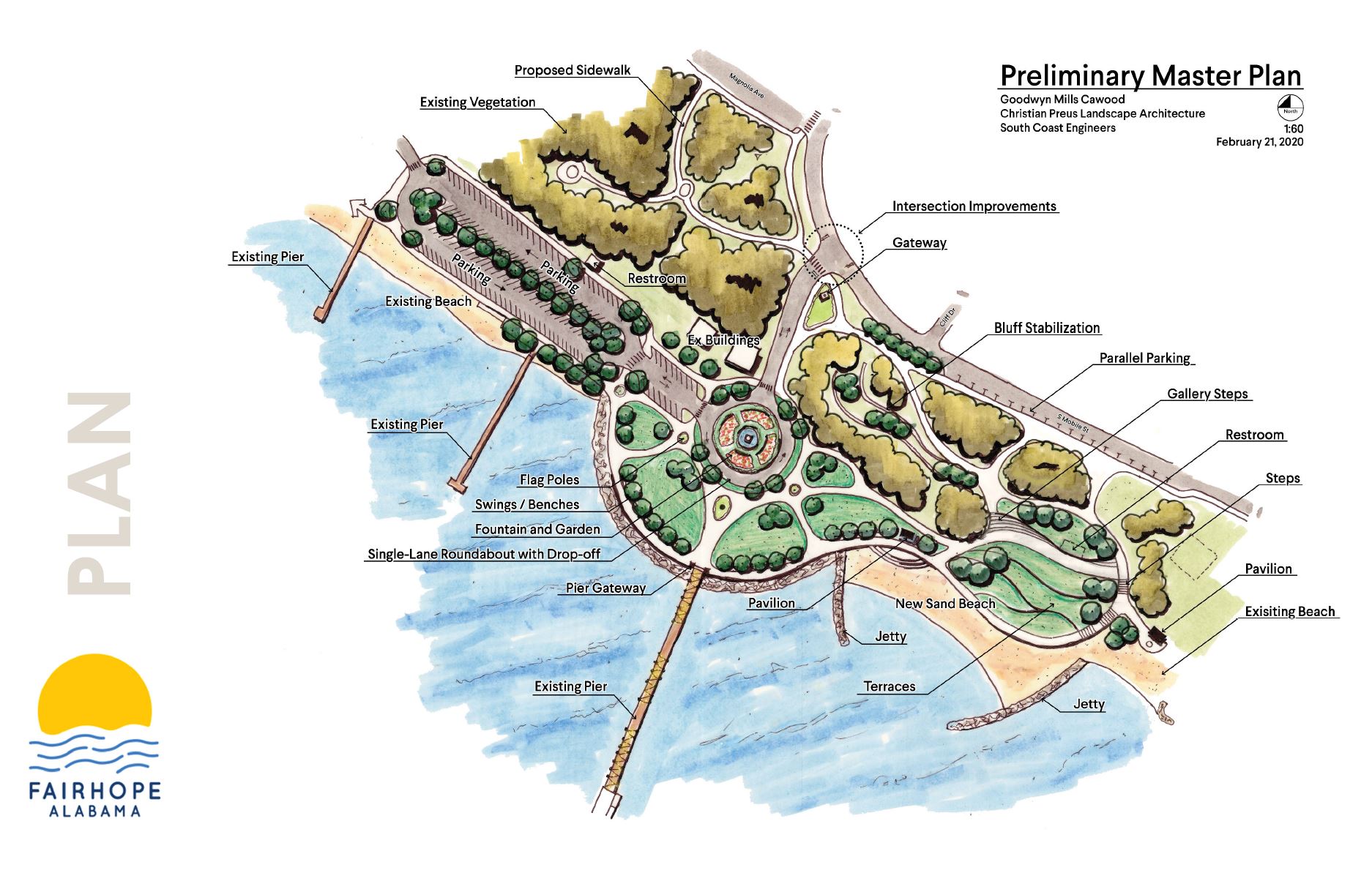 What is the Working Waterfront Plan?

This is one of the four RESTORE projects proposed by Mayor Karin Wilson in 2017. The Working Waterfront was a project funded out of the Economic Development bucket of funds. As the unofficial Town Center, this iconic location has been an active part of Fairhope’s history since its inception.

The Working Waterfront project is funded by a $6.2 million RESTORE Act Grant from the U.S. Department of Treasury. The purpose of the project is to make safe and user-friendly improvements to the 10-acre South Beach Park and Municipal Pier area to further enhance citizens’ use of the waterfront park facilities while ensuring the park’s long-term resiliency and sustainability. The grant is part of the State of Alabama’s RESTORE Act Direct Component funds that promote economic development and tourism.

When the plan was developed in 2017, it was created with bluff stability, interaction with the bay, pier use for all citizens, and easier, safer accessibility for pedestrians as well an increased visual experience in mind.

How far into the project is the City of Fairhope?

In May 2020, we have finalized the conceptual plan for the project which has involved the expertise of professional engineers from a variety of disciplines, key city staff and elected officials, an independent steering committee representing a cross-section of the community, and state and federal funding agency representatives. The City of Fairhope is proud to be the first municipality in the State of Alabama to be this far along in the implementation phase of a RESTORE Act funded project. Under the direction of Mayor Karin Wilson's leadership as an active member of the Alabama RESTORE Act Council, Fairhope has received nearly $17 million in RESTORE Act funds and has received the most awards of any municipality so far.

How did you develop the conceptual plan?

Based on the requirements of the grant funding for bluff stabilization and shoreline stabilization, the conceptual plan was developed with proposed improvements based on community input.

The improvements proposed to be made at the site were determined utilizing public input gathered at the State of the City meeting through a preferences exercise, a City-wide Project Input Survey and a weeklong design charrette with focus groups.

What are the biggest takeaways from the plan?

Main components of the proposed activities include stabilization of the steep eroding bluff, a new sand beach area with jetties for storm protection, rehabilitation of the existing parking facilities and circular drive, the addition of greenspace terraced steps and gallery style seating, new restroom facilities and pavilions, and intersection improvements at the park entrance.

Will parking be reduced?

No. The parking in the conceptual plan actually increases the parking at that site while also increasing the walkability of the site, making it more pedestrian friendly and ADA compliant.

The configuration has been changed to maximize human interaction with the park. Future parking is arranged to maximize the useable green space along the water’s edge north and south of the pier entrance for people. The new plan places a greater emphasis on human environment rather than the automobile, better fitting the goal of the Fairhope Single Tax Corporation to allow citizens access to the water and greenspace.

The new plan improves without any obstruction and makes more parking spaces available for sunset views.

The booth that is currently at that site will be relocated to the north of the parking area if park fees remain for North Beach.

Where is the handicapped parking in the new plan?

There will actually be more handicapped parking that is fully compliant with ADA Standards in the new plan, making the entire setup more accessible for all.   The new plan includes asafe drop off area at the entrance.

Why was parking at the entrance moved?

While the parking at the entrance to the pier has been proposed to be eliminated, there is now a proposed loading zone at the foot of the pier for those with limited mobility.  The goal from citizen input was to get valuable opinions for how to best utilize the increased usable green space.

Project Engineers will use this conceptual plan to begin the engineering design phase of the project.

Could this funding have been used in another capacity?

The $6.2 million grant award allows for the money to only be used for the Working Waterfront project. This grant is part of the RESTORE Act Direct Component Funds and is restricted to activities that promote tourism and economic development. The funds, though restrictive in nature, will provide invaluable assets to our City at no cost to citizens. The City recently received two additional RESTORE Act grants that are part of the Spill Impact Component. One grant for $10 million will rehabilitate the City's existing sewer system. Another grant for $650,000 will create a community-driven comprehensive land use plan for the City to address our rapid growth. The City is awaiting notice of award for a fourth RESTORE Act grant for $1 million to develop a plan to improve the water quality of Mobile Bay.