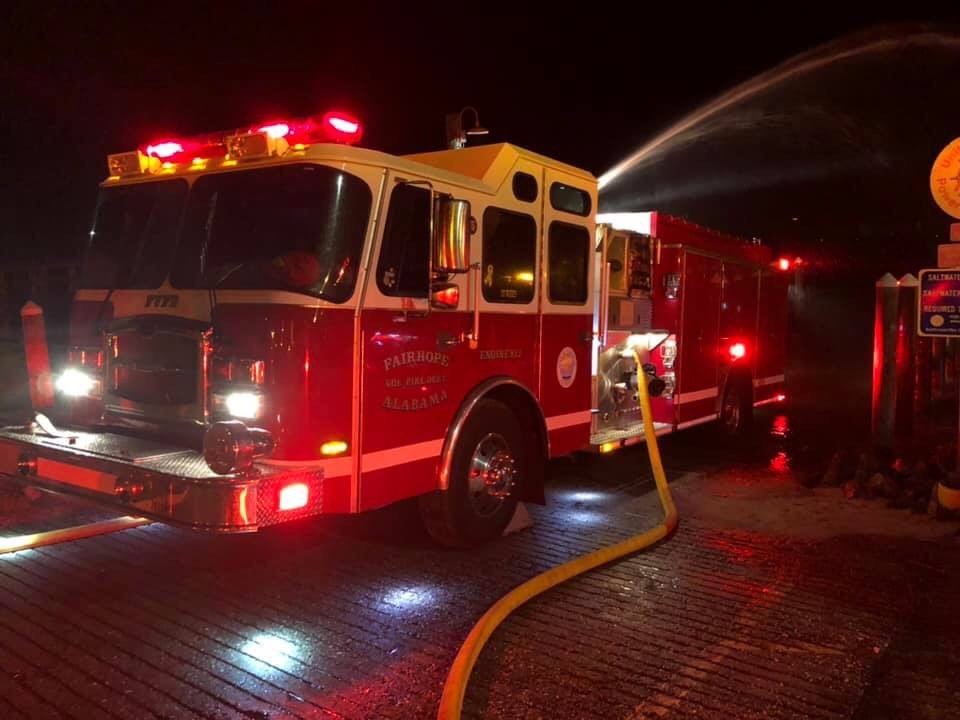 When it began in 1936, the Fairhope Volunteer Fire Department was initially called the Eastern Shore Fire Department, covering the span of land between Spanish Fort and Foley. A year later, the name was changed to what we know the department as today.

Though the fire jurisdiction covers an incredible 48 square miles, the department is still staffed by a 52-strong volunteer base.

“We’ve been a volunteer fire department for 83 years, and our volunteers have it in their heart to help people and take care of the community,” said Fire Chief Chris Ellis, a 20-year veteran of the department. “The number of volunteers we have is unheard of – most volunteer departments are struggling for manpower these days.”

The working environment provided and support the department receives contributes to that high number of men and women volunteering their time to protect others.

“People want to join us here,” Ellis said. “We have a good reputation as a strong fire department and that attracts volunteers.”

Volunteer firefighters train twice a month, providing a minimum of 73 hours of training each year, and the department sends firefighters to classes throughout the nation, including the National Fire Academy in Maryland.

Of their 52 members, 42 have become Certified Volunteer Firefighters through the Alabama Fire College, a distinction that requires 200 hours of training. Of that number, 27 volunteers have attained the status of Firefighter 2. Other further certifications in the department include Fire Officer 1-4, Instructor, Haz Mat, EMT, Paramedic, Apparatus Operator and more.

“Our firefighters are always training,” Ellis said. “So many of our volunteers have attained certifications above and beyond the Certified Volunteer Firefighter level, and those certifications put them on par with career departments.

The City also provides four experienced paid employees who provide Fire Maintenance at the stations on weekdays and are responsible for the daily upkeep of the stations, fire engines and equipment.

“They are also required to keep up with the annual equipment testing by the National Fire Protection Agency as well as record-keeping for the department,” Ellis said.

The department, which is separately incorporated from the City of Fairhope, subcontracts work to the City and is funded by a City budget that in 2019 numbers nearly $1 million, annual fundraisers and the Baldwin County Ad Valorem tax, which is split between 37 departments county-wide.

“We’ve had a wonderful working partnership with the City throughout our history,” Ellis said. “In 1989, the City bought us our first real engines – but the support has been provided the entire time from the citizens, mayor and council. It takes all of it to make it work.”

The department’s volunteer distinction isn’t unique to Fairhope. In fact, more than 80 percent of departments nationwide are volunteer-based. Ellis said that the level of service provided at a volunteer level is comparable to a career department.

“There’s no way to justify becoming a paid department,” Ellis said. “We save easily $6-10 million a year by staying volunteer – you can’t justify spending that kind of money for something you already get for free. You can’t put a career department together, not even one paid station, for that kind of money.”

The department’s consistent ISO rating of 4 speaks to the success of the current state. The fire rating scale, which helps insurance companies determine where to set insurance rates, takes into account multiple factors to determine a department’s score, which is recalculated every five years.

“We provide such great services, and we’ve done nothing but strengthen since the last ISO rating,” he said. “As ISO rates us, they suggest what improvements can be made to strengthen our rating.”

During the last rating period it was suggested that a new station was needed on the north end of town. Since that time Fire Station #4 has been built and staffed.

“We’re doing very well, thanks to the dedication of our firefighters, the City and our citizens,” said Ellis.